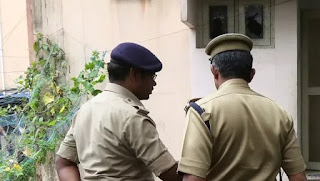 Lakhimpur Kheri: Unruly scenes were witnessed at a police station in Lakhimpur Kheri on Friday night as local Bharatiya Janata Party (BJP) leaders and workers allegedly barged into its premises and freed their colleague detained for “misbehaviour” with police, but the party denied charges it got him released forcibly.

BJP MLA Lokendra Pratap Singh, who also went to the Mohammadi Police Station, rejected allegations that his party’s Yuva Morcha worker Shibbu Singh was detained for harassment, as claimed in some media reports, which were tweeted by Congress leaders Rahul Gandhi and Priyanka Gandhi Vadra.

“I will quit as MLA if eve-teasing charges (sic) against Shibbu Singh are established. But, if such charges are found baseless, then those levelling false allegations must tender an apology,” he told PTI over phone.

“It is 100 percent false,” he asserted, when asked about the allegations that BJP workers barged into the police station to free their colleague.

No FIR or complaint has been registered against Shibbu Singh over his alleged misbehavior with the police, who remained tight-lipped over the incident.

The MLA said Shibbu Singh was returning from a party function, which ran till around 10.30-11.00 pm, when he was detained by the police as he was drunk and was put in the lock-up.

He said when a senior city leader of the BJP came to know about a party worker being detained, he went to the police station along with “our 2-3 workers, who are officer-bearers” and requested the inspector to release him if the officer “deemed fit”.

“The inspector said that Shibu was mildly drunk. ‘It was no big deal. I am releasing him’,” the MLA said. “He was released and the matter had ended.”

“I really don’t understand where did they get this eve-teasing theory (sic) from?” he asked. “If they prove this, I will resign as MLA. And if not proven, then those who are sitting at such high posts and leading a big party should tender an apology and resign.”

“They have made a mountain out of a molehill. It’s too shameful,” he said.

“I am ready for all kind of investigations — CBI, CID whatever. Our worker has done no wrong. And police too have made no mistake,” he said.

Congress leaders Rahul Gandhi and Priyanka Gandhi Vadra slammed the Uttar Pradesh government over the incident, referring to it as the ”save criminals” mission of the state dispensation.

Along with their tweets attacking the government, they also tagged the media reports as well.

Priyanka Gandhi said in a tweet in Hindi, “Will the UP CM tell that this is happening under which ”mission”? ”Beti bachao” (save daughters) or ”Apradhi bachao” (save criminals)”?”

The BJP MLA expressed anguish over the tweets. “The tweets were nothing but a reflection of a mean mentality of the Congress leaders who smell eve-teasing in every incident,” he said.