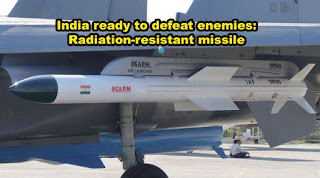 NEW DELHI: The Indian Air Force on Friday successfully test-fired the Rudram 1 of its Sukhoi-30 MKI fighter-fired missile to destroy enemy radars and surveillance systems. The missile is capable of launching speeds of up to 2 MAC and is said to have double the speed of sound.
The Defense Research and Development Agency has developed a new generation of AstraN. The intermediate test range, at Balasore, was checked at 10.30 am on the Odisha coast in Bengaluru.
A senior government official was delighted with the successful test, which is another big step, the DRDO said. “The IAF Seed is now capable of deploying enemy air defenses to the depths of enemy territory to destroy enemy air defense systems,” the official said.
This allows the IAF’s strike aircraft to operate effectively without any interruptions. This test demonstrates the capability of a large anti-radiation missile.
A new generation radiation-resistant missile, or NGARM, is integrated into the Su-30MKI fighter aircraft. Its range depends on the altitude of the fighter jet. It can be launched from a height of 500 meters to 15 km and can reach radiation emission targets in the range of 250 km.
All radars and the electro-optical tracking system were monitored at launch and on point, a senior government official said.
The missile is an air-to-surface radiation-resistant missile with a passive homing head that can detect radiation sources over a wide range of wavelengths. It can reach a target not only before launch, but also after launch.